TOKYO-- Our group company AOI Pro. Inc. has released a beta version of WONDERFUL WORLD - VR Private Tour™, a collection of VR content that gives users guided walking tours of fantastic places in Japan and around the world. 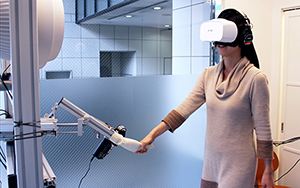 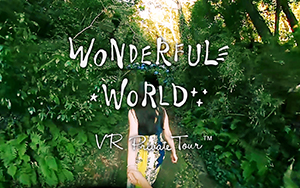 Full of thrilling ambience and enticing, inspiring views that awaken an impulse for adventure, WONDERFUL WORLD - VR Private Tour™ takes users on guided walking tours of the most spectacular sights in Japan and across the globe. The content puts sensory stimulation front and center, using 360-degree live-action video and stereophonic sound to create incredible realism, “walking” operations to put users in actual motion, a guide avatar with a “hand” for users to hold, and various atmospheric elements—wind and mist, for example—to round out the immersive, fully synchronized experience. The beta version features a location in the Kanto area, with a female guide leading the user around.

* The content is designed for users ages 13 and up, as exposure to 3D images may have negative effects on developing visual systems. 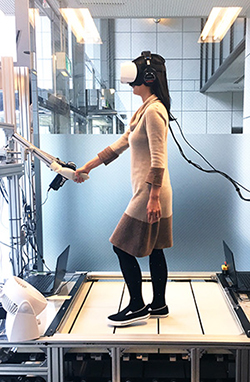 Although several VR walking systems have already made their way into the market, the WONDERFUL WORLD team was looking for a more natural walking experience than what the existing equipment could provide. To get that functionality, the team developed its content using the “TorusTreadmill mini”* walking system on loan from Professor Hiroo Iwata in the Faculty of Engineering, Information and Systems at the University of Tsukuba. The technology allows the user to hold the guide’s “hand” (an induction actuator), creating a stable walking environment and eliminating the need for any harnesses or safety rails. Integrating the induction actuator, sensory equipment, and walking equipment to synchronize the experience with video content, the WONDERFUL WORLD VR immersion system is the first of its kind in Japan (patent pending).
The team also benefited from a wide variety of collaborative arrangements. Prototype Inc. helped develop and program-control the sensory equipment for generating the system’s hand, wind, and mist textures, for example, while Digital Garden Inc. (a Group company) assisted with the implementation of the system’s video footage and stereophonic sound. Through that joint effort, the team successfully synchronized the visual experience with the other sensory elements in a sleek, seamless fashion.
The 360-degree photography was another cooperative effort, with international VR/AR production studio NOMA supervising shooting duties and TYO Technical Ranch Inc. providing technical support for the shooting, editing, and everything in between. The collaboration thus united video specialists and expert technicians, enhancing the overall development process.

* A walking system that recreates movement in all directions—forward, backward, side to side, and at various angles—via an array of conveyor belts

To create the system’s head-mounted display, the team used FOVE—a device capable of tracking user eye movements. FOVE, Inc., the company behind the technology, also got on board during the initial development stage to help monitor user behaviors and reactions to the experiences. The WONDERFUL WORLD system boasts potential applications in a wide variety of settings, including commercial facilities, travel agencies, airlines (both domestic and international), foreign tourism bureaus in Japan, tourism associations, and local specialty shops throughout Japan. Gearing up for full-scale implementation, the development team plans to use experiential tests and data resources to determine how well the system can stimulate the desire for experiencing never-before-seen worlds.

WONDERFUL WORLD - VR Private Tour™ is AOI Pro.’s second package of VR content, coming on the heels of VR Dream Match™ Baseball—a platform for realistic baseball experiences that came out in September 2016.
AOI Pro. has spent years honing its ability to create video content that “reaches the heart.” Working to incorporate that expertise, AOI Pro. will continue to fuse video and technology into immersion content that truly inspires.

About AOI Pro.
Since its establishment in 1963, AOI Pro. has established an industry-top level position in Japan for video productions centering on TV commercials. In addition to more than 600 commercial productions every year, AOI Pro. has been proactively working on feature films and dramas in recent years. As a 100% subsidiary of AOI TYO Holdings, the Group has the resources required for everything from planning to direction, production, 3DCG works, and the latest equipment.
http://www.aoi-pro.com/en/


About Professor Hiroo Iwata in the Faculty of Engineering, Information and Systems at the University of Tsukuba
Since 1986, Prof. Hiroo Iwata has been researching virtual reality, particularly in the field of recreating human sensations such as haptics and mobility senses. In 2015, he founded Empowerment Informatics with the goal to supplement and extend human functions as well as enabling technology to work in harmony with people. Empowerment Studio was created as a working environment for this program.
http://intron.kz.tsukuba.ac.jp/wp-vrlab/
http://www.emp.tsukuba.ac.jp/english/


About Prototype
Prototype is a creative studio that covers an extensive range of activities, offering everything from solution proposals to design, development, spatial design, and production. In addition to boasting a sterling reputation for its interactive content and video production, the company also provides environmental control via device integration (for lighting and projection videos, etc.) and develops installation products.
http://proto-type.jp/


About Digital Garden
Part of the AOI TYO Holdings Group, Digital Garden is a post-production studio that not only edits and color-grades video content (primarily for TV commercials) but also plans and produces 3DCG and interactive content. Recent years have seen Digital Garden get involved in the filming phase of video production, too, as the company continues to establish an effective workflow and expand its scope of business outside the post-production realm.
http://www.dgi.co.jp/


About NOMA
NOMA is an international video studio featuring members from Japan, the United States, Russia, and other countries around the world. The company formed in April 2016, with founder Taichi (director, producer, CEO of EDLEAD Inc. [California, United States]) spearheading the effort, and then announced its official launch of operations on October 1 of the same year. As a wide-ranging collection of directors, producers, actors, cinematographers, composers, and other professionals, NOMA handles the full scope of the video production process—from planning development to administration—on an in-house basis. The organization also benefits from a diverse mix of engineers, researchers, creators, artists, and entrepreneurs, who help propel the company forward with a cutting-edge, progressive vision of what video is all about. NOMA’s core competency is live-action VR video production.
https://www.noma-film.com/


About FOVE
Specializing in the development, production, and marketing of wearable hardware and software for VR-related applications, FOVE developed the world’s first technology for eye movement-based operations in VR space using infrared cameras to follow user sightlines. The company continues to do advanced development on its “Eye Tracking” feature and core technologies.
https://www.getfove.com/